What are they tweeting about you?

Twitter has a "search within lists" feature that allows journalists to find local reaction to breaking national news ... meaning potential "sources" for stories about your "incident." You can use it, too.

Instead of paying high-dollar marketing firms to ferret out online chatter about your reputation, try this before you get into crisis mode. You might find it useful for identifying and trying to engage with stakeholders before they become credible sources.

Christel Quek, regional content lead at Twitter, offers some great advice on how to build communities using any online forum.

Play nice and have fun in the big, online sandbox! 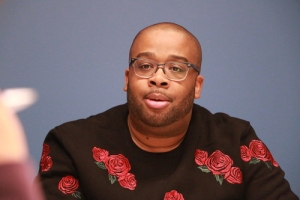 In PR, the more you can think and act like a journalist, the better your media placements. In internal communications, the more you write and mimic the journalistic style, the more-credible your content.

LieberJohnson was surprised by some of the pointers Mark Luckie, manager of Journalism and News at Twitter, shared yesterday with multimedia photojournalist Heather Martino on pbs.org's Media Shift/Knight Projects. The Tow-Knight Center for Entrepreneurial Journalism focuses on fostering new business models to ensure the sustainability of high-quality journalism.

Read the interview here - the quick tips below will help, but proper usage is nuanced.

"The more hashtags you use, the less likely someone is to interact with that Tweet."

Flying on Air Force One with U.S. President Barack Obama, she decided to snap a few iPhone shots during a "pool stop" in Saudi Arabia with ailing, 89-year-old King Abudullah. She posted the images to her Twitter account.

In a piece titled "My Arabian Night: How an Obama pool stop went viral," she describes the media firestorm and subsequent reaction from Saudis with little information about their ruler or his behind-the-scenes llifestyle.

Here's the media reaction to her unwitting images, courtesy of Muckrack.com.

If you're reading this, chances are you'll never fly on Air Force One and take serendipitous iPhone photos.

But you can learn a valuable lesson on the importance of perceived spontaneity on Twitter. Most businesses posting on Twitter rely on a few, disingenuous words to reach "followers."

Images, in popular perception, never lie even when PhotoShopped. They're credibly transparent, as we say at LieberJohnson. Photos pass a smell test with all stakeholders, including and especially media.

Try staging a few "casuals" that look newsy the next time you're looking for someting to Tweet. Forget the grip-n-grins. We're talking about you telling a compelling story by documenting an everyday event that walks your messaging talk: You at a safety meeting for a drilling operation, you talking to animated community members, you discussing expansion plans with a local farmer, you learning something new at a tradeshow.

Show something about yourself on Twitter! Don't forget - the next time you have an "incident" or unexpected blip on the media radar screen, reporters and editors will find your feed. They need easy, free and unlimited access to credible images. Serve up some positive ones. Save them the trouble of a Google search you can't control.

A Twitter exec tries to 'splain comments she made at Monday's Newspaper Association of America mediaXchange 2014. A great example of #damagecontrol and #watchhowyouspin. There's real news embedded in those tweets, too!

"So my plane just crashed."

A passenger on the U.S. Airways flight that 'nosedived' in Philadelphia tweeted "So my plane just crashed," then shared a twitpic and even a selfie.

Sadly or gladly, depending on your perspective, this kind of citizen journalism isn't new.

It should, however, serve to remind companies the best way to get a story across is to tweet and blog and post proactively.

We live in the social-media moment. In a time where everything you say, do and create vanishes - or, is highly tarnished by - what you post on Twitter. Tweet before you think . . . really think . . . and you're the subject of intense scrutiny and criticism by others who live and die by your 144 characters.

Sadly, author Stephen King decided to weigh in on the Woody Allen pedophilia controversy sparked by Dylan Farrow's op/ed piece in the New York Times. He's a well-regarded writer of pithy tweets that hit home. But this? Click to see if you can discover the true meaning of "palpable bitchery."

Remember, there is no such thing as accidental speech.

Texas conservatives are in an uproar (again) after the girl scout's official Twitter account invited girls to suggest their ideas of "incredible ladies." Alas, several of the women allegedly featured in an otherwise innocuous HuffPo piece about women-of-the-year, are pro-choice.

By inference, then, brownies who admire Texas gubernatorial candidate Wendy Davis or former U.S. Senator and Secretary of State Hillary Clinton support abortion? Is there a conspiracy amongst girl scout leadership to twist young minds via Twitter?

This conclusion is about as ludicrous as said conservatives' decision to boycott girl scout cookies.

What was meant as a salute to brave young women like Malala and female role models is now an object lesson about the wisdom of over-thinking everything you post or Tweet.