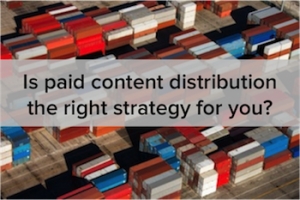 Years ago, LieberJohnson was one of the Houston Chronicle's premier providers of "advertorial" content for special sections. An advertorial looks like a news story, reads like a news story (at least ours did) but is really paid content. We fondly recall one Friday when an editor called to see if we could cough up five stories about casinos - by Monday. Yes, the special section was about gambling. No, we did not have time to take the casinos up on their generous, generous offers of a weekend, all-expenses-paid gambling binge in Lake Charles.

In the hurlyburly world of today's Internet, advertorials are better-known as "native advertising."

As Pew Research's Journalism Project discussed March 26: "In digital news, the overlap between public relations and news...became even more pronounced. One of the greatest areas of revenue experimentation now involves website content that is paid for by commercial advertisers - but often written by journalists on staff - and placed on a news publishers' page in a way that sometimes makes it indistinguishable from a news story."

The problem with this model is that it relies on the quality of the news group's "journalists on staff." Journalists aren't the best with messaging aka "spin." Nor are they necessarily able to ferret out the best "angle" from a client's perspective.

Like other agencies, we've created a content-management division to generate pay-for-play articles for clients who want messages that reverberate seamlessly between editorial and advertorial. The great thing about PR practicioners like those at LieberJohnson is we came of age in journalism school before morphing into corporate PR. We've worked both sides of the fence and marry the best of editorial skills with marketing expertise to create stories that pass readers' smell test.

You want to grab media attention? Journalism needs you know. And they're not picky.

Remember the last time you read an article online and were attracted to that intriguing headline/link to the right of your piece? Chances are, your interest was piqued by an article written by somebody just like us . . .

Explanatory journalism - characterized those intriguing, slightly colloquial pieces that informally explain things to the media-weary - is back in vogue. We write 'sponsored content' that's like this for some of our clients.

Sponsored content appears on web pages. It deliberately attempts to blur the line between 'editorial' and 'advertising.' It's also strategic and compelling, when thoughtfully incorporated into a campaign that involves media, consumers and thought-leaders.

LieberJohnson's done this since 1988. We write PR pieces that read like newspaper and magazine articles and send them off to trades and online websites that need to fill space, 24/7. It's ridiculously fun and easy. Read more, then let us do some strategizing for your content.